Weight  was 211 pounds. Gain of 1 pound. Not bad considering the circumstances.

I spent most of this week between the hospital, the school and looking after the twins. Also got the most inconvenient flat tire this week. I had to go to three places before I could get someone to fit me in and had the twins with while I waited. I ignored my diet and did no exercise. I guess staying the same weight is good, considering the week. I don't really consider a one pound gain to be a change, as I can poop at least that much out in one sitting.
Posted by MB at 8:00 am No comments:

This week was a write-off. We were preparing for the baby. I wieghted myself, but not as my usual time or day. I was somewhere around 215?


Baby comes next week. May as well consider this a lost week.
Posted by MB at 8:00 am No comments:

Still at 210 pounds. Doesn't look like I will reach my goal on schedule, unless I lose 10 pounds next week.

This was another tough week. This week was Spring Break for the kids (these postings ware 2 weeks behind), so I was unable to do my usual workout routine, although I get get to the gym twice.

Next week will be back to normal, so I am looking to having a good week. However, the baby is coming soon, so we will see how things go. Even if I stay at 210 for the rest of my life, it is still better than the 220-235 pounds I was at before.

Still, I am determined to break (and stay under) the 200 barrier, even if I get there later than planned.
Posted by MB at 8:00 am No comments:

First Picture of the Third

I am not so keen on putting up pictures of my family on a forum which anyone can read. However, in this one case, an exception will be made. 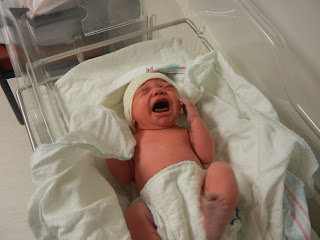 The Third: Liveblogging the Birth

Here is the liveblog of the birth of our third child. Only one in there this time.

The Wife is scheduled for an eight am C Section at the hospital. It is unlikely that I will be able to liveblog, since it is surgery and all. I will write it down live and blog it after. First postings at the top. (Edit: I was unable to post this as it happened. However, I took my notebook with me and wrote it down as it was happening. I think I preserved the spirit of the liveblog, if not the letter.)

6:32 - Arrive hospital. Drop Wife off at the front. Wife tells me on the way that we can't leave our stuff in a room when we go in for surgery, because they have a theft problem. I guess no blog updates until after the birth.

6: 40 - Nurse directs me to the prep room "Third door on the right". No one there. Did I lose Wife already? I call out he name. Wife is in bathroom changing.

6:45 - Wife kicks me out. Sends me downstairs to have some breakfast. "Don't bring it up, the smell will bother me". I tell the Nurse where I will be. She tells tells me not to bring food up to the room. The Wife can't eat anything and will be mad at me if I do.

6:47 - Arrive in cafeteria. Not open until 7:00 am. Read newspaper. Apparently PC's and Wildrose party are in statistical tie in polling in provincial election. Also pipeline bomber Wiebo Ludwig has died of cancer.

7:18 - Back  upstairs. Hallways have been redone since we were here five years ago.

7:26 - Wife is nervous. She starts to ramble when she is nervous and she is going on about the new hallways, that she has been shaved and is now itchy, the breastfeeding nazis, etc.

7:32 - The Wife does not like surgery. It is obvious she is nervous. My job will be the same as last time: Keep her calm during the procedure.

7:36 - Now she is talking about the cats. Obviously nerves.

7:37 - Wife comments that I am probably writing that she is rambling.

8:09 - Parade of doctors in the room asking questions. OR nurse, anesthesiologist, 2 more doctors (OB/Gyn and surgery resident). They all ask the same questions. They should all come at once and save repeating things 3 times.

8:25 - Someone removed a finger sized hole in the frosting. I can peek in.

8:31 - They have completed the spinal and catheter. The wife is now spread out on the bed like she is on the cross. Legs are tied down. No wonder she is uncomfortable.

8:32 - Surgeon arrives and is scrubbing now. She is a short Asian lady. Very no nonsense and direct.

8:38 - Anytime now I will be going in. I am looking around the recovery room and thinking that in 20-30 minutes we will be out here with our child.

8:44 - The number 2 to the surgeon is putting most of his weight on the Wife to force the baby out. He is a 6' 4'' Australian guy, while the 5' surgeon pulls the baby out. You could not pick a more mismatched pair if you were writing a comedy. Truth is stranger than fiction.

9:15 - Start name discussion. We did some talking about names in the surgery room. I was convinced it was a boy, so I had set on one name, Luke. The Wife was in charge of girl names. Lots of suggestions I don't like. Larrissa is the best one so far.

9:18 - This baby is loud. She is sucking on my finger and seems hungry. Time to try some breastfeeding. More name discussion.

9:53 - We leave the recovery room and up to the regular floor.

10:17 - More breastfeeding and she is latching. She is strong. I don't remember K being this hungry this early.

11:30 - Phone home to inform the family of the new addition.

2:00 pm (approx) - Start calls to grandparents and family telling them the good news. The Wife and baby are all doing well. It went smoother than I expected.


I am going to try and liveblog the birth of our third child tomorrow. Not sure if I will be able to. I don't think they allow laptops in the surgery room.


If not, I will liveblog to tape (ie. write down everything on pen and paper and then post it up after).
Posted by MB at 11:00 pm No comments:

The big day is tomorrow. In less than 12 hours, the Wife will be having a C Section for our third child.

I think the Wife wanted a natural birth, but since the last two were by C Section, there is a 1% chance that natural birth will pop her scar. If that happens, it can get bad very fast. As well, the Wife is over 40, so there is a greater chance of trouble. They told us that if she went into labour before the date of the surgery she could try naturally, but if she was not done quick, they would go in. I think they upped the surgery date a bit, to make sure they could go in. Too much unnecessary risk otherwise. The wife went in for pre admission today. They checked her out and everything was fine.

I was a bit divorced from the whole pregnancy this time. Last time I was right in there the whole way. I still remember the first ultrasound. The Wife went in and they told me they would come to get me in about 20 minutes. Sixty minutes later I was climbing the walls. Three times the amount of time they said and I was wondering what was going on. I was just about to start demanding to see the Wife when they called me in. Picture this. I am very anxious about the long wait. I am convinced something is wrong. I go into the examination room and the Wife says “Guess what?” I say “I don't know what, tell me.” “No” she says, “Just guess.” “No I am not going to guess. Tell me what is going on RIGHT NOW!”

There I was, nervously waiting for 20 minutes, anxiously waiting another 40 minutes, going over in my mind all the things that could be wrong and wondering what was taking so long and why they did not come and talk to me. Then I finally get in there and the Wife wants to play guessing games? I was some pissed off. Then she tells me it's twins. I just about fell over. At first I did not believe it. It was the last thing on my mind.

Some people have asked me if I want a boy or a girl. We still do not know, the Wife wanted to keep it a surprise. It would be nice to have a son to carry on the family name, to chop firewood when I am old, someone to pass my science fiction collection on to. Of course, I have girls and girls are nice. Children naturally gravitate to the opposite sex parent (Oedipal complex and all that), so another girl would be easier. However, I am already outnumbered 3 to 1 and I am not looking forward to their teen years. Four females and a male in one house?At least the dog and one of the cats are male.

The most important thing is that it be healthy. Anything else is a bonus.
Posted by MB at 8:00 pm No comments:

This was a bad week.

I did not even weigh myself. Although minimal cheating, especially compared to last week, also minimal exercise. Life got in the way, and I was busy.

I think I maintained, but we will find out next week.

And I still have not read the book about food that I bought.
Posted by MB at 8:00 am No comments:


I am not too unhappy about this. It's about time I had a setback. This week was very busy. J was still in the hospital and my visits forced me to break my usual routine. And I cheated a lot. I had a few cravings and I indulged them.


If I had still lost weight after that week, I would have questioned the need to diet at all.
Posted by MB at 8:00 am No comments: